Our members learn new skills, follow a challenging and adventurous programme, make new friends and above all have fun.

Boys and girls aged from 10 years old to 14½ years old can join our Scout Troop
which meets on a Wednesday night from 6:30pm to 8.30pm

Introduction to Scouts
Scouts aims to build and develop young people’s confidence, sense of adventure and outdoor skills, as well as encouraging them to explore their beliefs and attitudes and be creative. It offers them the independence to put these skills into practice at camps and even on international trips.

Scouts are encouraged to work together and take the lead on all sorts of projects, from community based work to planning games and activities for their meetings.

Structure
A Scout Troop is divided into small groups called Patrols, each headed up by an older Scout called a Patrol Leader, and often with an Assistant Patrol Leader.

Activities
Scouts are encouraged to take part in a wide range of activities as part of their programme including traditional Scouting skills, such as camping, survival and cooking, as well as a wider spectrum of adventurous activities, from abseiling to zorbing. Participation rather than meeting set standards is the key approach, and there are a number of badges and awards that Scouts can gain to recognise their achievements.

The Scout Promise
There are a number of variations of the Scout Promise to reflect the range of faiths, beliefs and attitudes, and nationalities, in the UK within Scouting:

For Muslims
In the name of Allah,
the Most Beneficial
and the Most Merciful,
I promise that I will do my best
to do my duty to Allah
and to the Queen,
to help other people
and to keep the Scout Law.

For Christians, Jews and Sikhs
On my honour,
I promise that I will do my best
to do my duty to God
and to the Queen,
to help other people
and to keep the Scout Law.

For Hindus and Buddhists
On my honour,
I promise that I will do my best
to do my duty to my Dharma
and to the Queen,
to help other people
and to keep the Scout Law.

For humanists, atheists and those with no defined faith
On my honour,
I promise that I will do my best
to uphold our Scout values,
to do my duty to the Queen,
to help other people
and to keep the Scout Law.

The Scout Law
1. A Scout is to be trusted.
2. A Scout is loyal.
3. A Scout is friendly and considerate.
4. A Scout belongs to the worldwide family of Scouts.
5. A Scout has courage in all difficulties.
6. A Scout makes good use of time and is careful of possessions and property.
7. A Scout has self-respect and respect for others.

The Scout Motto
Be Prepared

Flag
The Scout flag is dark green, bearing the Scout symbol and Motto.

Uniform
Scouts may wear a teal green shirt or blouse, navy blue activity trousers or skirt, a group scarf with a woggle, and a Scout belt. 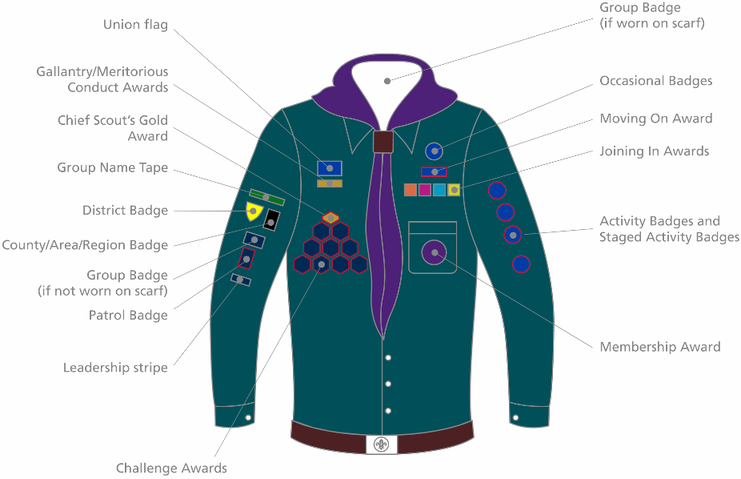